Gargano promontory is a manifold reality thanks to the richness of its natural assets. Here the majesty of unpolluted nature is merged beautifully with archeology, history and religion creating unforgettable experiences.

Out trekking routes are put into place in order to make both your active holiday memorable and to let you discover the most undisclosed aspects of this splendid biological island by offering you half-day excursions fully immersed in nature where you can improve your sensitivity and sense peace and calm.

Each of the following offered tours was designed and approved by expert guides and entails, aside from the mere excursion, a stop at a farm in order to let you taste our best typical products.

Spring is the perfect season to admire the spledid variety of wild orchids spontaneously growing in and embellishing the Gargano promontory, especially in the area of the town of Mattinata.

The initial part of the itinerary will be dedicated to the discovery of the colours and the scents of these flowers, which are known to be as much captious as ephemeral.

Monte Sacro, with its 872 meters, can be considered as the very first upland in this area of Gargano.

The route to reach the peak is characterised by a first stretch studded with ancient rural buildings, which probably provided the abbey with support operations when it was still active.

The ground is often muddy, therefore it is walkable for anybody, and the efforts put into the climbing will be rewarded by the view at the top.

After the first stretch, with steep slope, the climb is easier, but the route is still arduous due to the presences of many rocks. While walking across the remains of the huge "Nemus garganicum", the wide forest that used to cover the entire promontory, the sound of the wind, blowing through the leaves of the several types of oak trees present in the area, follows the visitors until the woods start gradually leaving room to a wide meadow where the ruins of the abbey are located.

While visiting the vestiges of the abbey you will be wreathed in the typical mystery of these places, by now inundated by nature.

The promontory, which starts rising from the plain (Tavoliere delle Puglie), has always fascinated its inhabitants. In past times, as well as today, the area of Gargano was considered as a mystic and spiritual place, therefore it is able yearly to attract thousands of believers from all over the world.

Such holiness can be experienced in places like San Giovanni Rotondo, the Santuary of San Michele Arcangelo and the Pulsano Abbey at Monte Sant'Angelo (medieval pilgrimage destination); places that are hard to reach due to their location, but still very evocative for this very reason. It is not difficult to understand why, during 11th century, the Benedictine monks decided to build the Abbazia S.S Trinità on the peak of "Monte Sacro", which was already a temple designed to worship the pagan deity of Jupiter Dodoneo.

Duration of the excursion: full day

For infomation and relative costs:

The itinerary is structured accross the area on the border between the towns of Peschici and Vieste, characterised by the scents typical of the Mediterranean scrub and Aleppo pines.

The plant life in this area preserves its natural dense and bushy appearance. Here you can find plants of lentisco, rosemary, capers and mirtle, which are all part of the Mediterranean scrub present both in the hinterland and on the coastline of Gargano. The distincitive trait of this special plant life, whose conifers are typical of the Mediterraneas Sea, consists of its coastal pine groves:  Aleppo Pine tree, which is easy to recognise due to the dark-reddish bark of its gnarled log, usually found clinging to white calcareous cliffs.

Along the way, a stop-over is done at Riparo (Shelter) Sfinalicchio, the best and most articulate expression of parietal engraved and iscribed art known in southern Italy. The engravings, placeable chronologically during specific and particular moments of the late Paleolithic age, are distributed across a surface of 3,70 meters.

By going further, you will arrive in the thereabouts of Sfinale Bay, an evocative inlet marked on the left side by the Torre di Sfinale (Tower of Sfinale), which was part of the protective system of watchtowers spread across the coastline. The towers were built around half of 1500 on specific panoramic points in order to spot and report the arrival of Turks, enemies that were a constant threat to the Gargano territory.

Halfway through, a stop-over is done at donkeys stables/instructive farm, a special place for kids, while folkloric for the adults.

Here you will enjoy a rich picnic with typical products, while leaving children free to play with the little donkeys.

Duration of the excursione: half-day

Planned pickup of the guests at the holiday village.

For infomation and relative costs:

With this naturalistic itinerary we offer an excursion in one of the most spectacular paths of Foresta Umbra, in the hearth of Parco Nazionale del Gargano.

The trail starts from a stop-over and picnic area in località Caritate (m.250) and goes forward throught an oak forest, up to a "cutino", a small artificial lake which, aside from gathering rainwater in order to water the livestock, attracts the wild fauna and also represents an ideal living environment for many amphibious species.

Then the trail continues directed to the Sfilzi integral reserve which expands for 56 hectares on the slopes of Valle della Carpinosa, and is populated by many animal species like roe deer, boar, badger, fox, wild cat and marten. This is the transition area between the Turkey oak forest and the beechwood, and it is protected in order to guarantee the survival and the purity of the Sfilzi Fountain, the only enduring mountain spring of Gargano, characterised by an original structure and by the presence of the Italian triton (truturus italicus), an Urodel Amphibian similar to the lizard.

From Sfilzi to Casalini the path is definitely more strenuous to travel, but such effort is rewarded by the beauty of the surrounding landscape and the plant life. A this point the circular route goes downhill by passing through the beechwood until it becomes Mediterranean plat life.

The tour ends by returning at the starting point.

Duration of the excursion: half-day

For information and relative costs: 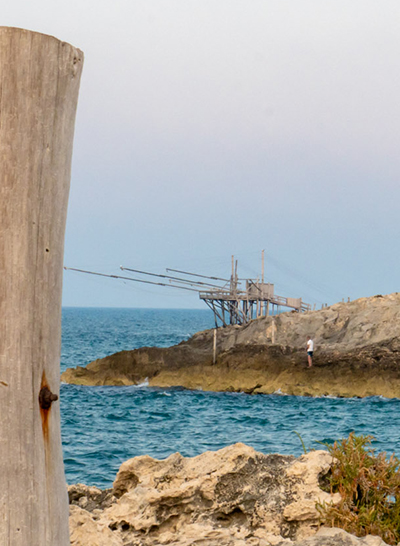 While travelling across the coast of Gargano, your gaze will be enraptured by Trabucchi: particular wooden architectural structures used to fish, where huge nets dangle from long aerials stretched to the sea.

Trabucchi are ancient fishing devices, deriving from the need of facing the sea while remaining with the feet firm on the shore.

Today they are evident proof of the incredible intelligence of those simple men, who have left their mark over time telling us the story of how past generations were used to living in complete harmony with nature and the sea, as well as the story of a local economy primarly based on fishing and sleekness.

Duration of the excursion: half-day

For information and relevant costs: